← more from
1equalmusic
Get fresh music recommendations delivered to your inbox every Friday.

by The Omnific & The Song Company 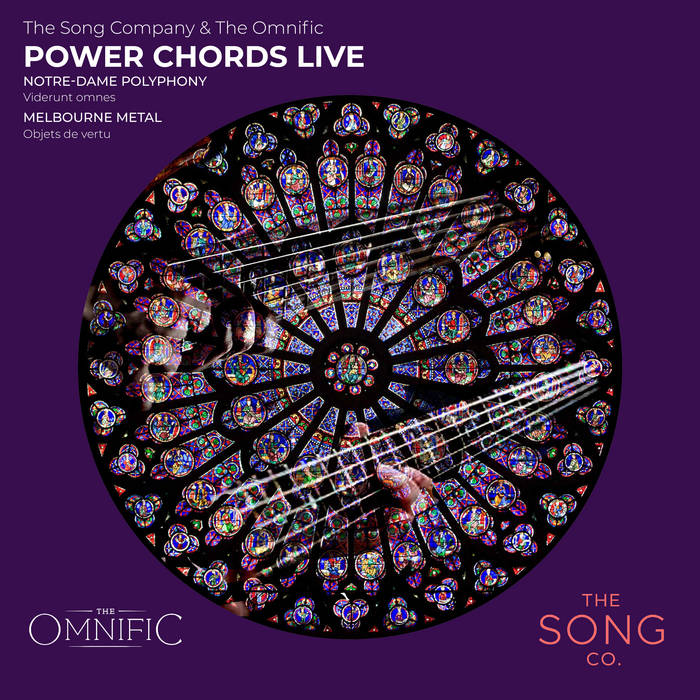 THE OMNIFIC & THE SONG COMPANY LIVE
A sequence of polyphony from 12th-century Paris’s Notre-Dame Cathedral and 21st-century Melbourne.
theomnific.bandcamp.com
thesongcompany.bandcamp.com

A collaboration across genres with a unifying interest in the deep resonances of vocal cords, struck strings, and powerful harmonies. A cluster of rising stars from Melbourne, The Omnific has already made a name for their unique rhythmic interplay and wordless metallic fantasias. The Omnific’s two five-string bass guitarists’ classic duo Kismet and other works are interleaved with multi-voice chanting and improvisation from the male voices of The Song Company in music from Magister Pérotin’s masterpiece Viderunt omnes and its late 12th-century inspirations, echoed by a high soprano in his most haunting of songs, Beata viscera.

ALL THE ENDS OF THE EARTH HAVE SEEN...
In Holy Week 2019 the heartstopping images of Paris’s Notre-Dame Cathedral ablaze were transmitted around the world. The music at Notre-Dame dates back to the time of its initial construction in the late 12th century and includes the earliest surviving polyphony in four parts – put together in the Cathedral’s magnus liber organi – “the great book of organum”. Pioneering composers Léonin and Pérotin made discoveries and decisions about harmony, rhythm, and notation that echo in music written today. For the second national tour in our Above Beyond season we joined forces with the dynamic bass guitar duo, Matthew Fackrell & Toby Peterson-Stewart from Melbourne band The Omnific for a resonant mix of plainchant, rhythmic basslines, 12th-century organum, and wordless metallic fantasias. POWER CHORDS ATTACHED – now POWER CHORDS LIVE – is a unique collaboration across genres resulting in sounds that are both earthy and ethereal.

THE OMNIFIC & THE SONG COMPANY
The Omnific is a progressive instrumental band from Melbourne, Australia featuring two bass players and a drummer. With several EPs out, the band has attracted immense interest from all corners of the globe. The young trio has established working relationships with reputable companies Darkglass Electronics, Neural DSP and Ernie Ball Music Man, seeing them represent the brands with performances at the Melbourne Guitar Show, bringing attention amongst the ‘Gear-Nerd’ community. Coupled with their online play-thru, gear demo and music videos, the band’s reach is beyond what many would expect from this impressive Melbourne trio so early in their career.

At The Song Company we make music with our voices. That means all kinds of sounds and stories from many times and places. We are always looking for connections between one piece of music and another – either sonic or semantic – and that’s why some of our programs include really very disparate repertoire side by side. POWER CHORDS is perhaps the craziest, at least on paper. But our hunch (no pun intended) was right: there is a beautiful correspondence between the polyphonic creations of two 20-year-old bass-players from Melbourne – Matthew Fackrell and Toby Peterson-Stewart, and those of Magister Léonin and Magister Pérotin who flourished in the late 12th century at Notre-Dame Cathedral in Paris. This is a very special program indeed.

And that’s because music itself knows no genres. At least, the genres that we’re familiar with such as “heavy metal”, “classical”, “contemporary” (that last one means different things to different people anyway) are useless if they act as boundaries that prevent the music categorized inside them from spilling over and inspiring audiences who are at risk of filtering them out before even listening. POWER CHORDS ATTACHED was a risky program financially as well as artistically: who’s to say if the audiences for one genre of music, however ill-defined, can conquer their instinctive distrust of another genre. To be specific, does the fact that the band that Toby and Matt play in is labelled “metal” mean that audiences for “classical” music won’t be able to appreciate the sophisticated creativity and aural beauty of their songs (check out their video for Moonstruck – one of the songs we’re performing together)? No, not at all, but will they turn up to listen and find out? And on the other hand, will the fans of instrumental band The Omnific be interested in a gig/album that has singing in it, and very ancient sacred music at that? We very much hope so. Love music? – you’ll love POWER CHORDS LIVE.

ARCHITECTURE IN STONE AND SOUND...
Visitors to Notre-Dame in Paris are first struck by the imposing Western façade, but on entering the building the experience is transformed by “the wonderful and uninterrupted light of most sacred windows pervading the interior beauty”; then there is the awareness of a vast mass of people contained within the towering walls and arches; and above all, the unmistakeable sound of distant voices and movement reflected from innumerable ancient corners. For Parisians living in the late 12th and early 13th centuries, however, this was an evolving experience as the new structure slowly took shape above the city skyline: a building project that would span several generations from the laying of the cornerstone in 1163. Léonin, who was considered the master of polyphonic composition in his time, must have spent much of his career in the unfinished ‘choir’ or Eastern portion of the Cathedral, separated from the regular sounds of construction by some kind of temporary screen which perhaps was moved column by column westwards over the years. By the time Pérotin made a new edition of Léonin’s magnus liber and added his own massive polyphonic version of Viderunt omnes – most likely for New Year’s Day in 1198 – practically the entire space of the Cathedral was ready to resonate in sympathy.

FROM PLAINCHANT TO POLYPHONY...
The foundation of Western music is plainchant – unmeasured melodies to be sung at different times across the year. Plainchant tunes such as Viderunt omnes would have been known by both the professionals in the choir and the congregation in the nave. There are two simple ways of constructing polyphony out of plainchant: adding a drone – one note held on as a pedal under the plainchant, or by simultaneously singing the same plainchant at a fixed interval above or below (the obvious example is of men and women or children singing the same tune an octave apart). Other possible variations in the performance of plainchant include a measured style (with each note either the same length or twice as long as the next), and the improvisation of a free part over the existing plainchant.

The two-part music or organum duplum by Léonin and his colleagues is built upon these earlier developments, with the familiar tune of the plainchant either slowed down while a second part elaborates on top (organum purum), or rhythmicized in sync with the new solo line (discantus). One section from the Viderunt omnes plainchant – with the single word “Dominus” – was repeatedly used for rhythmic and harmonic experimentation: many new two-part versions of this section were composed (called clausulae), and sometimes new words were added to the upper part. With the addition of a third, and then a fourth voice, the rhythmic organization of the “discant” style was fully extended to the upper parts throughout – just as the Cathedral’s original arcade, gallery, triforium, and clerestory had to be carefully co-ordinated. And just as the exceptional height of the Gothic style of architecture required new solutions for this scale of weight-bearing, there were also further harmonic implications of combining so many voices – composers had to discover how to balance intricate mixtures of consonance and dissonance (harmonic intervals which sound relatively more or less pleasing to the ear) over a long span of time. According to an Englishman (so-called ‘Anonymous 4’) visiting Paris in the later 13th century it was “Master Pérotin who made the best quadrupla”, and it is his Viderunt omnes – the earliest surviving example of four-part harmony – which opens the manuscript of the Magnus liber organi.