by The Song Company 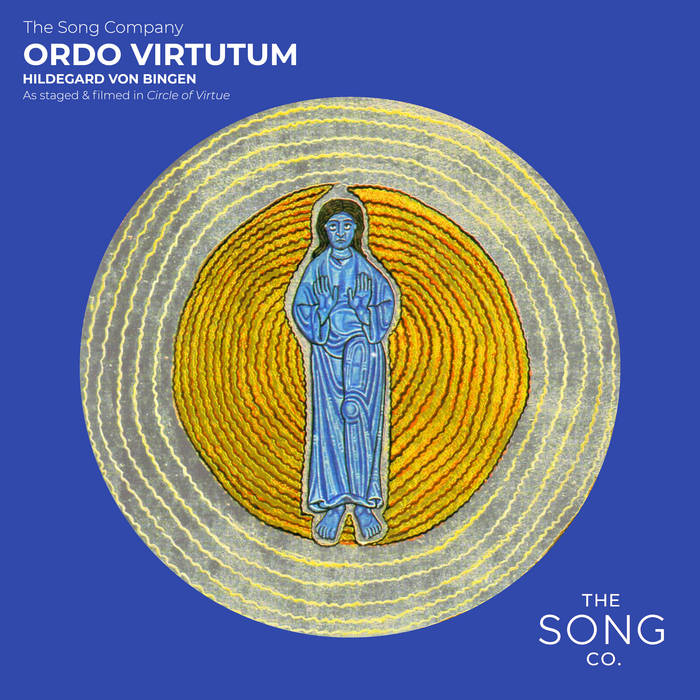 One of the earliest-named composers in Western musical history and outspoken in her dealings with princes and popes in mediaeval Europe, Abbess Hildegard of Bingen created the earliest-known opera or music drama, Ordo Virtutum, for the female inmates of her Abbey at Rupertsberg. Recorded and filmed at Waterloo Studios Australia for Circle of Virtue, The Song Company presents a semi-staged performance – directed by Leonie Cambage – of Hildegard’s story of the internal struggle of a Soul battling for her mental well-being with seventeen Virtues on one side and the Devil on the other...

The Benedictine Abbess, Hildegard of Bingen (1098-1179), is one of the very earliest composers known to us. As well as her fame as a medieval composer, she was and is renowned as a visionary, prophet (the ‘Sybil of the Rhine’), theologian, preacher scholar, physician, and poet – and was recently declared a Saint by Pope Benedict XVI. A tireless reformer of the Roman Catholic church, Hildegard tussled fearlessly with aristocrats, archbishops, prelates, popes, and princes, and in her later years travelled across Germany preaching and advocating for change. Having entered the monastery of Disibodenberg as an oblate at the age of eight, she was elected as magistra in 1136, later founding, against considerable opposition, her own convents of Rupertsberg in 1150 and Eibingen in 1165.

Hildegard’s output as a writer was prodigious, encompassing letters to the rich and powerful seeking action and to others providing advice and consolation, and texts addressing theology, medicine, astrology, and botany. Her musical compositions include seventy-seven songs, the Symphonia armonie celestium revelationum, (Symphony of the Harmony of Celestial Revelations) and the Latin sacred drama, Ordo Virtutum, regarded as the earliest surviving ‘morality play’.

Hildegard stated that from childhood, she experienced intense visions in which, through ‘the reflection of the living Light’, she heard the voice of God and saw powerful images revealing God’s message. In 1141, she stated God had instructed her to ‘write down that which you see and hear’. A trio of theological treatises followed over a thirty-year period – Scivias (Know the Ways of God), Liber Vitae Meritorum (Book of Life’s Merits), and Liber Divinorum Operum (Book of Divine Works). In these treatises, Hildegard describes and interprets her vivid, strange visions in immense detail, and instructs how their insights should be applied to life. Scivias was written between 1141 and 1151; the manuscript produced at Rupertsberg was adorned with illuminations capturing in meticulous detail Hildegard’s descriptions of her visions.

It is in Book Three of Scivias that the text of Ordo Virtutum is found. In the Symphony of the Blessed, the thirteenth and final Vision, Hildegard tells the story of Devil tempting a struggling Soul, and her fall, repentance, and rescue by the Virtues. The Virtues’ exhortations are drawn from Vision Three (The Tower of Anticipation of God’s Will) and Vision Eight (The Pillar of the Word of God).

The play was composed around 1151 and may have been first performed by Hildegard and her community of nuns for the consecration of Rupertsberg convent, with her teacher and scribe Volmar, a Disibodenberg monk, perhaps cast as the Devil. Notwithstanding that Hildegard’s personification of the Virtues as females agrees with earlier models, the play’s subtext of what women can achieve through collaboration, perseverance, and courage would not have not have escaped its audience.
WORDS & MUSIC

Ordo Virtutum is a powerful blend of poetic texts brimming with the vivid imagery of Hildegard’s visions, monastic restraint in the pace of the narrative, echoes of liturgical ritual, and peaks of musical and emotional intensity conveying that the Soul’s eternal salvation or damnation is at stake.

Music was a powerful weapon in Hildegard’s evangelistic weaponry, and she wields it very deliberately in the play. With the exception of the Devil, the characters sing together and as solo voices in plainchant throughout. During their rescue of the penitent Soul, the Virtues sing:

“Volumus te reducere et nolumus te deserere, et omnis celestis milicia gaudet super te – ergo decet nos in symphonia sonare”
“We want to bring you back – we shall not desert you, the whole host of Heaven will rejoice in you; thus it is right for us to sound our music – to play instruments in harmony.”

Denied singing or harmony of any kind, the Devil must deliver his evil persuasions by speaking or shouting – in this production, his utterances are elaborated with unpitched percussion, tritones (“diabolus in musica”) on the portative organ, and wholesale digital effects.

For this production the music has been transcribed anew from the original notation and rhythmic inflections inferred according to the burgeoning 12th-century system of rhythmic modes – contrasted with a much freer soloistic rhythmic interpretation by some of the main characters in the drama. Humility and three of the other Virtues introduce themselves with their “Ego” statements before the drama begins in a semi-improvised praelocutio. Drones and other harmonic and colouristic effects including “symphonia” – instrumental sounds from the time – have been added in a characteristic blend of moderation and exuberance.

In connecting with Hildegard’s play, its ideas of human vulnerability, forgiveness, healing, and the collaboration of women seemed to resonate most powerfully; diffused from their religious source, these ideas seem more relevant than ever. Equally, the Ordo Virtutum is a work whose author, and her remarkable visions, cannot be separated from its realization. As such, Hildegard’s visions and their illuminations inform the physical world of the play and our own ‘illumination’ of that world.

The vision titled the Trinity in the Unity (as featured on the album cover) in particular underpins the play’s environment, in which concentric circles of silver and gold represent the light of the Father and the flame of the Holy Spirit surrounding the Son of God. In the touring production from the filming of which this recording was made, this illumination is re-envisioned as a three-dimensional mandala, suggesting both the beauty and brilliance of the Palace of the Virtues (a place for contemplation and healing), and a battle ground for fighting the Devil. We play also with the refraction of light, and Hildegard’s use of colour in her imagery – for example, she describes a ‘wondrously bright light’ shining on Discretion’s breast, “...divided into many rays as is the splendour of the sun when it shines through an object’s many openings...”

In the course of the play, colour is in several key objects – the jewels on Humility’s crown and the red of Celestial Love’s flowers and Patience’s crown. The blue of Charity’s skin and tunic, the brilliant red of Faith’s necklace, and the purple of Discipline’s tunic are also enhanced with handheld colour filters and lighting washes.

Through these devices, and through transitions from utter darkness to brilliant light, audiences have experienced Ordo Virtutum immersed in Hildegard’s plainchant and imagery, with voices, sound, light, darkness, and colour conspiring to evoke the extraordinary richness of Hildegard’s visionary world.

Ordo Virtutum falls into a number of sections that reflect textbook concepts of Latin rhetoric and the idea of an “arrangement” (dispositio) of a classical oration, as outlined by Cicero and others – whether or not these were known to Hildegard is a matter of conjecture, but they are helpful labels for understanding the structural division of the play into introduction (exordium), statement of facts (narratio), outline of the argument (divisio or partitio), proof (confirmatio), refutation of opposing arguments (confutatio), and conclusion (peroratio).


Hildegard on the Soul:

“...fiery globe that had no human lineaments... this human form... changed its colour according to the movement the globe made in that form...”

“...many whirlwinds assailed one of these globes in a body and bowed it down to the ground; but gathering back its strength and bravely raising itself up, it resisted them boldly and said with a groan, ‘A pilgrim, where am I? In the shadow of death...’”

The Soul describes its tabernacle “...of marrow, veins, bones, and flesh... but alas! Its sensibility gives rise to filth, licentiousness, and wantoness of conduct and every kind of vice... but when I think... of the leaden scale of sin, I condemn all those works that burn with carnal desire...”


Hildegard on the Virtues:

“...for each of these virtues is sweet and delightful, never weighing people down or constraining them, but softly instilling into their minds the sweetness of the heavenly kingdom.”

“...not that any virtue is a living form in itself, but a brilliant star given by God that shines forth in human deeds. For humanity is perfected by virtues, which are the deeds of people working in God.”

“...all these figures are uttering their individual speeches through the mystery of God, to admonish humans; for in all the virtues, God’s tenderness sweetly instructs the minds of the people and exhorts them to put aside evil and raise themselves up to good.”


Hildegard on the Devil:

“...Before the end of the world the Devil will perish and the truth be known.”

“A worm, wondrously large and long, which aroused an indescribable sense of horror and rage... black and bristly, covered with ulcers and pustules, and divided into five sections... like stripes... and they were full of deadly poison... eyes bloody... and burning within... ears round and bristly... nose and mouth of a viper, its hands human, its feet a viper’s feet, and its tail short and horrible...”


Hildegard on the Trinity in the Unity:

Humility, The Queen of the Virtues
Jessica O’Donoghue