by The Song Company, Antony Pitts 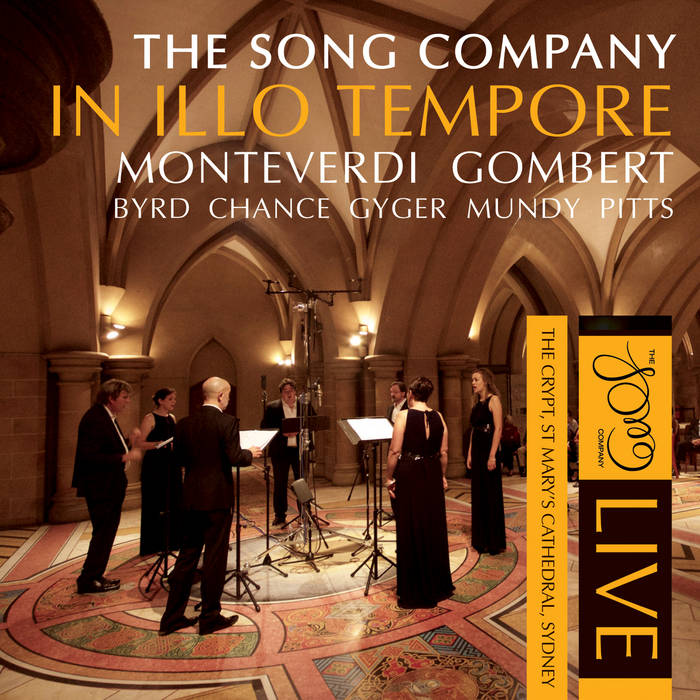 A live programme in three uninterrupted sequences – TOMB | HADES | THRONE – exploring the very different temporal perspectives of the Easter story in glorious polyphony by Monteverdi, based on his musical forebear Gombert, with new Australian motets by Alice Chance and Elliott Gyger, and by Antony Pitts, Artistic Director of The Song Company, Australia’s national vocal ensemble. Recorded in the round in the cavernous acoustics of the Crypt of St Mary’s Cathedral, Sydney.

Listen online as a Bronze/Silver/Gold Member at the.song.company/live-in-illo-tempore

SYDNEY MORNING HERALD July 2018 ★★★★½
“A time. A place. Another world. The Song Company's latest album was recorded live in the Crypt of St Mary's Cathedral, Sydney. Standing in a circle, facing inwards, the group's six choristers explore Easter via Monteverdi's​ Missa​ In illo​ tempore, interlaced with other vocal meditations, old and new, on the liturgy. Thus the eerie directness of William Byrd (1540-1623) makes way for a rich tangle of notes, hanging on in the air like ghosts, from Elliott Gyger (1968-), and harmonious chords veer off into to chromaticism in Monteverdi​ and Pitts. It is intoxicating stuff: in the Cathedral's stone crypt voices ring on long after the singers have finished, lending layers of organic polyphony to the artifice of the composer. Music director Antony Pitts and his ensemble sculpt the moving air with superb finesse, and sound engineers Bob Scott and Ross A'hern​ shepherd it into an immersive​, uncannily clear surround sound. I challenge anyone to distinguish the intricacies of recording and to disentangle the divinely entwined polyphonics. But, honestly, that's not the point: just put on your headphones, close your eyes, and imagine yourself tumbling through time and space.” (Harriet Cunningham)

Recorded by Bob Scott and Ross A’hern in the Crypt of St Mary’s Cathedral, Sydney
during two concerts and a rehearsal in April 2016 to Pyramix at 192k.
Edited by Antony Pitts in Sequoia at Golden Radio.
Mixed and mastered by Ross A’hern and Antony Pitts
at the Chapel of Sound, Sydney in April 2018.
Photographs by Andy Richards
Design by Adrian Self